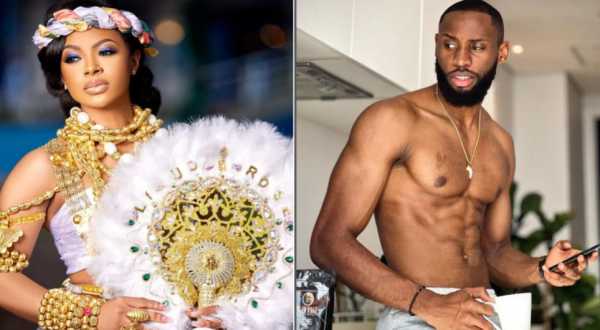 The relationship between Liquorose and Emmanuel was one of the ‘Ships’ that many Nigerians had rooted for and hoped that it would sail to another level but all hope was dashed.

The rumours of their breakup started after Liquorose shunned the saloon opening of Emmanuel at Port Harcourt and when they also ignored each other on their birthdays.

Despite the speculations, the duo remained silent on the state of their relationship and Liquorose often turn down questions about Emmanuel during interviews.

However, an anonymous Instagram blogger alleged that the relationship between the reality TV stars crashed after Liquorose caught Emmanuel with a guy in an uncompromising position in Dubai.

Emmanuel debunked the report and issued a warning to the blogger.

Meanwhile in the last night episode of the reunion show titled ‘Friendship and Relationship’ Liquorose in a short clip said she caught Emmanuel with a girl in Dubai when they were dating.

She said: “We’re dating right? And I walked into you and a girl in Dubai”

This sparked reactions from many fans who claimed that Emmanuel wasn’t serious with his relationship with Liquorose.

wrldprincecharming wrote: “Dubai the Land of wahala… But to be honest emma didn’t rate rose the way she rated him.”

itzjumbanks wrote: “She went through all that and there was no shade from her? She’s indeed a strong lady, a queen and more”

themby__b23 wrote: “Liquorose is the girl she thinks she is, I love the fact that she don’t condone cheating, her motto must be “He cheats I leave”! Gotta love her for that no wonder her exes don’t forget about her, she’s rare”

rhodel_purple wrote: “Emmanuel fans who insulted Angel because of DUBAI saga please yall take mic and tell us what you have to say about this”

mz_amara wrote: “They were busy going live while in dubai..but failed to show us the major happenings”

Woman reveals she has a rare condition that makes her smell like fish; says she takes her bath four times a day