A 25-year-old woman, Brie Duval, has narrated how she woke up from a coma to find her fiancé had ghosted her and moved in with someone else.

The Australian woman who has amassed millions of views on social media after she shared the heartbreaking experience revealed she went into a coma after a horrific accident she had last August.

She stated that she came to Canada to work in her dream job and that she had been in a wonderful relationship with her boyfriend for four years, even getting engaged.She did, however, suffer a horrible fall from a car park on August 29, 2021.

One of the walls was under construction, and Brie hadn’t seen the large drop to the concrete pavement beneath in the dark, as there were no signs or tape.

She fell headfirst over the edge and had to be airlifted to the University of Alberta Hospital where she was placed on life support in the ICU. 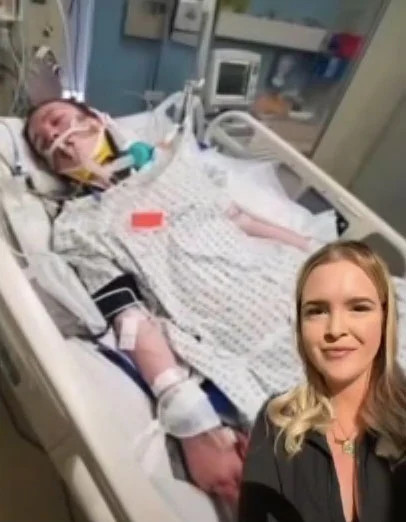 She had multiple fractured bones and a brain injury, and she spent four weeks in a coma. Meanwhile, doctors had told her mother that she had only a 10% chance of surviving the accident.

Fortunately, she began to show indications of healing and eventually awoke. Although she awoke with amnesia, she began to piece together the events of the evening.

When her phone was returned to her, she discovered that her fiancé, with whom she had been living, had allegedly blocked her on social media and had entirely abandoned her. Brie also found a text from his new girlfriend, informing her that he had moved in with her and her son and that she should not contact him.

“I have not heard from him since I have been in the hospital. He’s completely and utterly left me in the dust. So I don’t even have closure as to why this happened.” She told the mirror

Brie, who suffered a traumatic brain injury (TBI) in the accident, was allowed to return to Australia five months later to be with her family.