A South African man has taken to Twitter to congratulate his sister on the purchase of her first car, a Mercedes Benz, at the age of 19.

The man identified as Dlala Champion shared a photo of the young lady posing with her luxury whip at the showroom, which was trimmed with a ribbon.

Sharing the photo, he revealed that his 19-year-old sister bought the Mercedes Benz herself.

“Congratulations to my sister for buying a Mercedes at the age of 19”, he wrote. 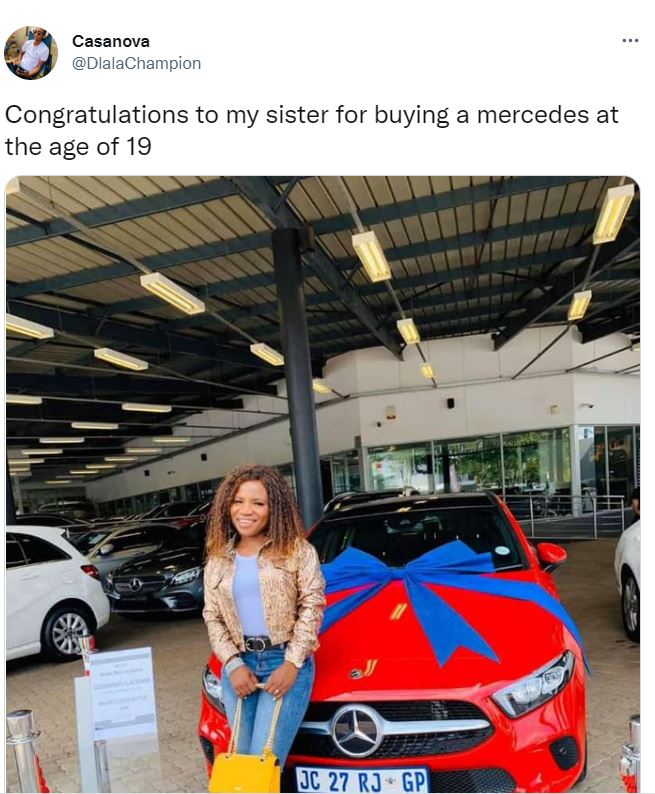 A while ago, a viral video showing the moment a 20-year-old boy presented a Benz to his girlfriend as a birthday gift sparked outrage online.

In the video, the young boy surprised the love of his life with a Mercedes-Benz GLK worth millions of naira. The young lady was in a blindfold when the young man took her to where the luxury whip was parked.

After removing her blindfold and seeing the pricey birthday gift, the young lady was speechless. Shortly after the car was unveiled, the 20-year-old and his friends, who were there to cheer for the couple, began a show of wealth: the young men made cash rain on the celebrant.

The video was first shared on TikTok with the caption, “20years old boy just bought Mercedes-Benz GLK350 for his girlfriend as birthday gift”.

The video stirred an uproar on social media. While some questioned the source of the boy’s wealth, others opined that buying such a pricey gift for a lady at his age is misplaced priority.