Some women in Owo community have gathered to summon the god of iron and war ‘Ogun’ to avenge the worshippers killed in a church in Ogun state.

It would be recalled that June 6 was a black Sunday for Nigerians after gunmen invaded a Catholic church in Owo, Ondo state, and shot sporadically at worshippers.

The State Government claim 22 persons were killed in the horrific attack while 52 survivors who were shot are currently receiving treatment at the Federal Medical Center, Owo; St Louis Hospital, Owo; and the Owo General Hospital as well as some private hospitals.

However, the Bishop of Ondo Diocese, Jude Arogundade, insisted that over 38 worshippers were killed in the massacre.

Well, some aggrieved women in the community have decided to take matters into their own hands and called on “Ogun” to get justice for the victims. 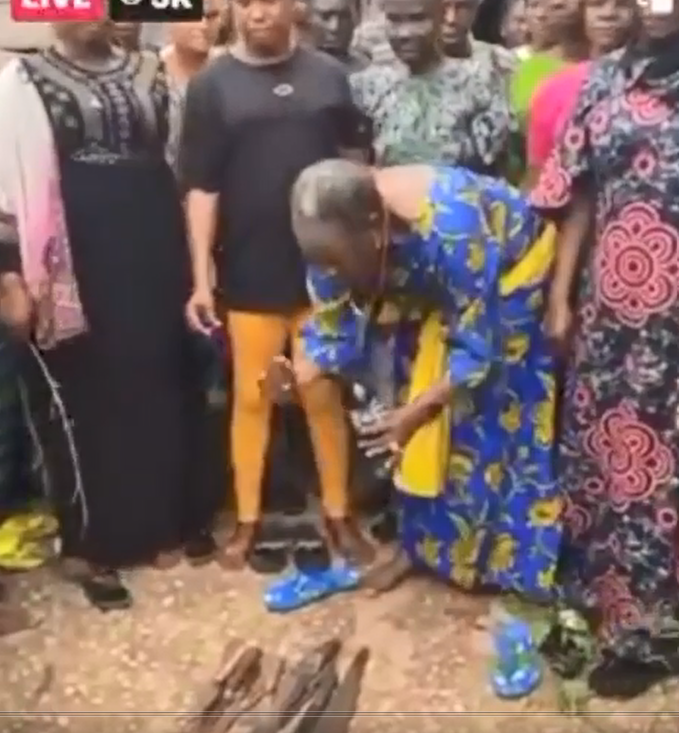 In a video shared online, metals are seen on the floor while a woman poured dry gin on it and invited the god of iron to fight for them.

The other women shouted “Ase” in unison in response to the prayers.

Watch the video below,

In other news, operatives of Ekiti State Amotekun Corps have arrested some men after they were caught transporting ammunition hidden under grass sheets in two trucks.

Video shared online shows a Amotekun officer searching the truck laden with grass sheets only to discover weapons and ammunition hidden behind the sheets.

The suspects are seen lying facedown in the middle of the road after they were apprehended.

They were intercepted in Ikere Ekiti, Ekiti state.